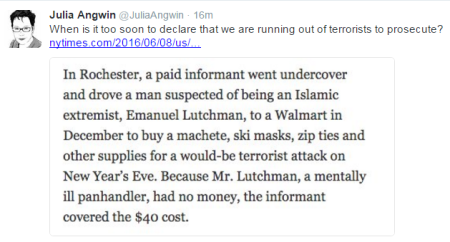 The New York Times covers a practice that has been going on since we declared war on terror. If you can’t find terrorists to justify the vast anti-terror apparatus you’ve created, make some, and then make headlines. The authorities, of course, say that they are making sure we’re safe from people who are inclined toward terrorism by getting there before they connect with real bad guys, but this is innocent until proven gullible.

This is the tactic that inspired If Then Else. It’s just wrong, and it doesn’t make us safer.

Of course there are real terrorists. We had two notable terrorist attacks in the U.S. just last year. People who are alienated and stirred up by hateful and apocalyptic rhetoric sometimes act out violently – in these cases, shooting co-workers at a party and people visiting a Planned Parenthood office, violence in the name of extremist beliefs and a sense of righteousness lit with a fuse of resentment. But our unprecedented surveillance regime doesn’t spot these people. Collecting it all doesn’t work. It distracts from focusing on actual threats.

A 2010 report recently surfaced in Britain saying our cousins have so much data they can’t find the needles in the haystacks. One response is to pass laws to increase surveillance capabilities and spend a lot more money on haystack-building and needle-detection. The other is to stop spending so much effort on building haystacks and start looking for dangerous sharp objects that are likely to hurt people. That’s the approach I favor.

In any case, using paid informants to coax people to act dangerous so that they can be arrested and headlines can say that terror plots have been disrupted, justifying even more intrusive surveillance, is a terrible kind of security theatre.

This entry was posted on Wednesday, June 8th, 2016 at 8:32 am and is filed under ideas. You can follow any responses to this entry through the RSS 2.0 feed. You can leave a response, or trackback from your own site.