I’ll start with the resolution. Let’s get the craziness out of the way.

I’ve been working on a young adult novel that I like, but which isn’t the kind of thing that people in publishing call “commercial fiction.” It’s not literary fiction, either. It’s just this . . . thing about a young person whose brother has been unjustly accused of planning a terrorist attack and about the surveillance state we live in. On new year’s eve I took a deep breath and told Twitter:

In case you’re not a librarian or academic (or an academic librarian) OA stands for open access. All of my scholarship is available in some flavor of open access – all available for free online and most under a Creative Commons license. I’ve decided for a  couple of reasons to go that route with fiction, too.

Reason One: You have to be really good and really lucky to make it in traditional publishing. I read a lot of books and I’m grateful to the authors and publishers who feed my reading addiction, but I haven’t been good and lucky enough to break out, except in hives. Turns out I’m severely allergic to the business end of publishing. Why try to do something that makes you miserable?

Reason Two: You have to be really good and really lucky and willing to produce like crazy to make it in self-publishing. I can’t write that way. My muse is like a toddler taken for a walk. Forget about getting anywhere fast. Besides, I think our fetish for productivity is irreparably harming ourselves and the planet. So that’s out for me.

Combine my slacker tendencies and an allergy to the business of publishing with serious reservations about Amazon, the leading platform for self-published books, it makes sense for me to try something that fits my personal values better. More like the zine world – hand-made and imperfect and shared for love, not money. To be honest, most fiction writers are motivated more by love than money because hardly any make a living at it. But even so, productivity, sales, and frantic marketing efforts infuse the writing world and that’s what I want to leave behind. It’s inconsistent with my anarchist tendencies and my own mental health.

“Would anyone want to read it?” That was a silly question! Some of my Twitter pals said they would, because they are sweeties, but a piece of that new year’s resolution that I didn’t express properly is that I’d be happy if someone reads this story, but I don’t want to fall into the trap of actively competing for their attention. That’s part of the doomed economic model that’s making such a mess of things, including culture and the internet.

Happy new year to all. I’ll be using Pressbooks to serialize this thing and will be blogging more about it here later. I just solved a gnarly problem with the ending this morning! Now I just have to sort out all the other gnarls. All in good time . . .

But now without further navel-gazing, here are my top ten crime fiction reads from 2015. I read a lot of good stuff, but these stood out to me at the end of the year. The list could be much longer.

Don’t read this on a transatlantic flight. Swedish detectives team with intelligence officers to find out if a threat found aboard a full jet headed for New York is real and, if so, how to deal with it. They only have as long as the jet’s fuel lasts. The author worked in European counter-intelligence and her take on Swedish versus American intelligence practices was engrossing. I also was happy to have some police procedural aspects mixed in with the thriller aspects of the story.

Belinda Bauer / RUBBERNECKER
My mystery pals at 4MA chose this book for discussion, and I’m glad because I found it deeply entertaining. A young man with Asperger’s and a troubling fascination with dead things takes an anatomy lab course. Meanwhile, we follow the fate of a man gradually coming out of a coma after a car accident who unluckily witnesses the murder of a fellow patient. Nicely assembled puzzle that combines humor and emotion quite satisfyingly.

Jari Jarvela / THE GIRL AND THE BOMB

An engrossing psychological thriller involving a black teenager in Finland who wants revenge when her good friend, a street artist, is pushed by a security guard to his death from a building after he has been “bombing” train cars with brilliantly-executed graffiti. The story is told in two voices – that of the disaffected girl and of her chosen enemy, who wasn’t actually responsible, but who grows increasingly angry and defensive. Full of ethical issues and vivid characters – really good story, well translated. 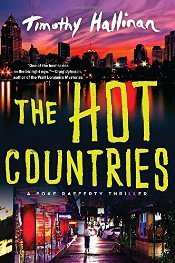 Timothy Hallinan / THE HOT COUNTRIES
Yeah, I know. This series is always on my top ten. So sue me for being predictable. Visitors to Tim Hallinan’s Bangkok have previously met a group of aging ex-adventurers who hang out at an expat bar. They’ve been there long enough to know their way around the glittering city, but now getting around is getting more difficult. One of them, Wallace Palmer, is becoming increasingly vague and likely to misplace himself, forgetting where he lives and chasing after glimpses of a woman he loved who disappeared from his life many years ago. When a new expat joins them, flashing white teeth and an encyclopedia of factoids that he shares without a pause, they grow a little uncomfortable. Not only will he never shut up, he seems terribly interested in the whereabouts of their friend, travel writer and family man, Poke Rafferty. He seems to think Poke is hiding a treasure that he’s come to Bangkok to claim. My full review is at Reviewing the Evidence.

Another 4MA group discussion book. Arkady Renko, with little left to lose, tries to find out what happened to an old enemy found dead in Havana Bay. Wonderful juxtaposition of a post-Soviet Russian’s experiences with its former ally, now struggling to manage on its own. Really fine. I dithered between this and TATIANA, which I also enjoyed, though not quite as much as the earlier book which, somehow, I had missed reading.

Laura Lippman / AND WHEN SHE WAS GOOD
Fascinating story about a woman who decides to open her own business – as a “madam” providing services to D.C.’s elite after things go badly wrong with her pimp. When her cover story as a lobbyist for women’s employment is threatened, she has a problem, particularly because she doesn’t want her son to know what she really does. Lippman does a great job creating a character who is both vulnerable and tough as nails as well as brilliant at business.

The third and final Ellie McEnroe story in which the veteran of a confused and pointless war tries to find her feet in a confused and confusing China. Her cheerful, scary billionaire acquaintance, Sidney Cao, has a job for her. He wants her to find out what’s going on with his three kids (the one child policy is optional for the powerful) and in particular whether the American adventurer who’s hanging out with his youngest son is bad news. Readers of this trilogy will guess fairly soon: they’re all bad news. There are two strengths in this trilogy.One is the fascinating picture it provides of the New China, a place that’s aggressively under construction and chaotic after a seismic cultural shift toward consumerism. The other is Ellie’s voice – casual, unsettled, constantly searching for something she can’t identify, faced at every turn with a need to figure out the least bad of terrible options. She’s a fascinating woman and a nifty guide to a place that has changed beyond recognition. I’ll miss her (but I won’t write whatever Brackmann writes next). 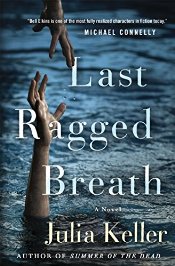 Julia Keller / LAST RAGGED BREATH
A fine entry in the series featuring a tough, vulnerable prosecutor who wages war on the problems facing her beloved West Virginia county. This one asks us to remember the unnatural disaster of Buffalo Creek, when a mining company’s dam broke and their toxic sludge swept away a town, killing over a hundred people in minutes, but also to appreciate the work of miners made redundant by machines. I wrote a more detailed review for Reviewing the Evidence. 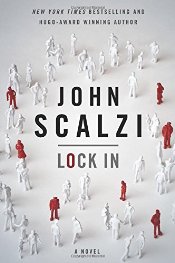 After an epidemic leaves millions “locked in,” conscious but unable to move, scientists develop a way to link their brains to “threeps” (androids); others affected are “integrators,” able to host locked in people who want to borrow a human body. Our locked-in hero joins the FBI (getting around with a threep) and is quickly involved in strange murder case in which it appears a murderer was an integrator hosting someone else when committing the murder. Sounds preposterous but it worked for me – the scene-setting was handled so efficiently it had a great pace. Scalzi primarily writes SF, but handled the crime aspects of this near-future story very well. Inventive and compelling. There’s also a highly-intelligent handling of gender issues that . . . well, I didn’t even realize until after I finished the book which is the whole point. It would be a spoiler, but there’s a great analysis of it here. Scalzi is not only good fun, he’s wonderfully wise about the world.

Alan Glynn / BLOODLAND
This is a terrific conspiracy novel that is a bit challenging in that there are lots of characters and multiple points of view, but sharp writing, excellent plotting, and an appealing young Irish out-of-work journalist as a protagonist. He has a commission to write a biography of a silly celebrity but stumbles upon a multinational scheme to make money off a mine in Congo run by people who will dispose of anyone who gets in the way. Cracking read. Excellent narrative skill. Loads and loads of rage burbling under tasty ethical dilemmas. Yvonne Klein wrote a review at Reviewing the Evidence that explains why it’s far more than the bog-standard globetrotting conspiracy thriller. In fact, it’s very nearly its opposite.

Here’s to good reading (and, for me, more stress-free just-for-fun writing) in the new year.

This entry was posted on Friday, January 1st, 2016 at 4:45 pm and is filed under book reviews, ideas, publishing. You can follow any responses to this entry through the RSS 2.0 feed. You can leave a response, or trackback from your own site.